Home / News / One Piece: Theory of Three Ancient Weapons in One Piece

One Piece: Theory of Three Ancient Weapons in One Piece

Ancient Weapons in One Piece is the name to refer to three extremely powerful weapons and enough to destroy an island or change the whole world. The origin and time of appearance of all three Ancient Weapons have not been revealed. We only know that they represent the two main forces on earth during the Void Century of the Great War. 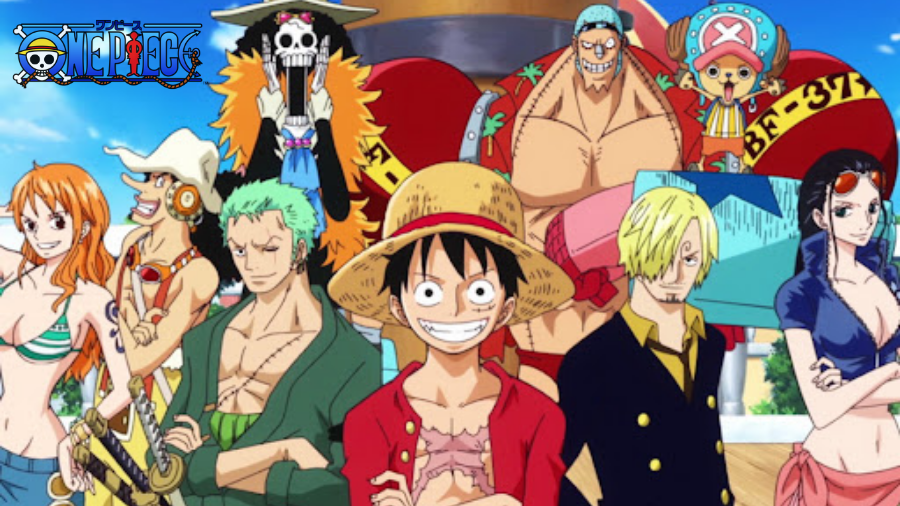 Perhaps with Poseidon, we don't need to put any more theories on it because Poseidon's true identity has been revealed as the mermaid princess Shirahoshi. Legend has it that from the "Drum Century" there was a mermaid who was able to talk and communicate with the Sea Kings, powerful beings that rule the seas and not only that, she could also request the Sea Kings to do the work. according to your own wishes. This is one of the most powerful abilities in the world when it comes to commanding the Sea King. Just think if she wanted to destroy an island, it would be too easy, simply with the help of the Sea King, that island would disappear in the blink of an eye. But these are not "small" Variable Kings like the one that bit off Shanks' hand, but these Sea Kings are deep-sea creatures and each one is bigger than an island. 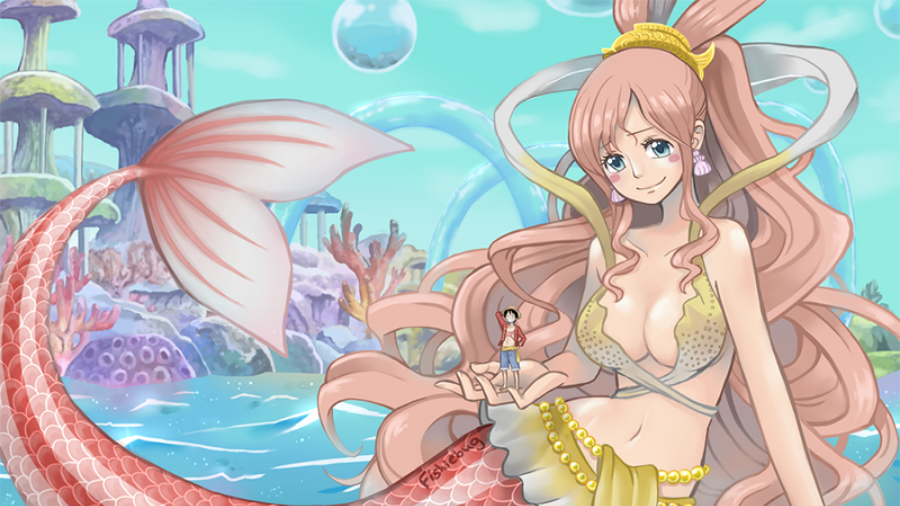 Up to now, this ability is possessed by the mermaid princess Shirahoshi, which is literally on Luffy's team. In general, there is no longer a mystery to say about the power of Poseidon because it is quite simple. But one thing of particular note is that the connection between Poseidon and Joy Boy as well as the giant ark Noah has not been revealed yet. This mystery may have to wait until the last arc of the movie when Luffy's group reaches Laugh Tale and learns the truth about Joy Boy before we get the answer.

The second Ancient Weapon is Pluton, the god of the underworld. Pluton also appeared in One Piece, not directly but indirectly through a blueprint. Appearing quite early in One Piece, Pluton is described as an ancient ship with terrible destructive power. Legend has it that it has enough power to blow up an entire island in a flash with its own firepower.

Pluton was formed on the island of Water 7 around the time of the Void Century. The blueprint for rebuilding Pluton is held by the mermaid carpenter Tom. After he died, this design went to Franky and after knowing the design he destroyed it to avoid falling into the wrong hands. 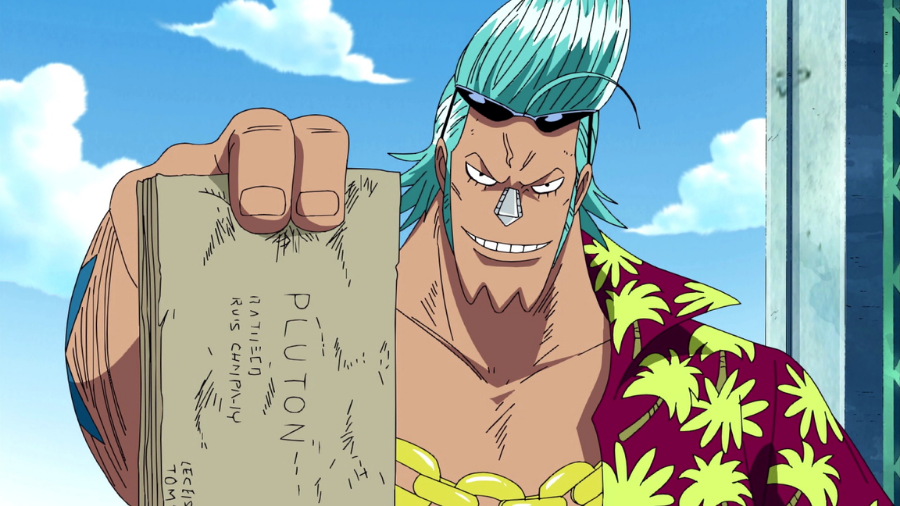 Although the exact location of Pluton is unknown, the poneglyph in Alabasta contains information about its location.

Although the blueprint of Pluton was destroyed and it never actually appeared in One Piece, but to make it easier for you to imagine, the Thousand Sunny ship is like a miniature of Pluton, ie if it is completed. Pluton will have tremendous destructive power beyond imagination.

But the question here is whether Pluton still exists and how many versions of this Ancient Weapon will there be? First, Pluton's blueprints were passed down from generation to generation, most recently Tom and Franky. Therefore, it is understandable to leak the design to the outside when a military secret is so important and many people covet it, such as the Navy. Moreover, even if the design in Franky's hand has never been leaked, is it possible that there is only one design? 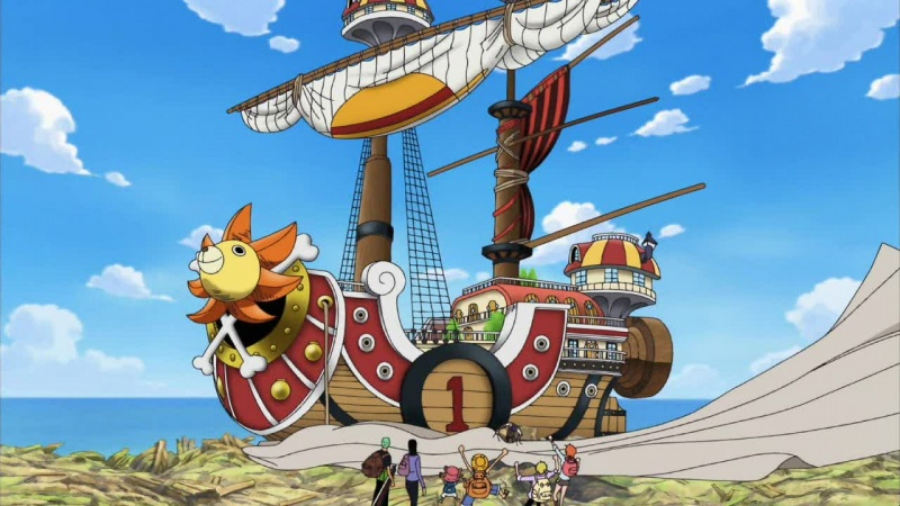 The nature of Pluton is very different from that of Poseidon, Poseidon has only one instance, Shirahoshi, and Pluton is a real weapon, that is, can be created and even with many copies. So I think it's extremely likely that Pluton still exists and will appear in One Piece soon. But the question is, which side will it be in and for what purpose?

The name "Uranus" was first introduced with Poseidon, specifically when Robin discussed the Ancient Weapon with Neptune of the Ryugu Kingdom. If Poseidon is the God who rules the sea. Pluton is the earth, Uranus is the name of the God who rules the sky. Not much is known about Uranus until now, we only know that Uranus's strength is comparable to the other two Ancient Weapons.

When it comes to Uranus, there are many theories surrounding this Ancient Weapon. The first is the theory that Uranus can control storms and that it is in the hands of the Revolutionary Army, or specifically Dragon. There is not much evidence for this other than that each appearance of Dragon brings with it a change of weather, such as the first appearance in Loguetown when the Dragon arrives with a storm. Regarding this theory, I think it is unlikely to happen when there is not much evidence for Dragon's possession of Uranus as well as about the change in weather possibly due to the ability of Devil Fruits, even Haki. when we get to see Shanks and Whitebeard each use Haki to split the sky. 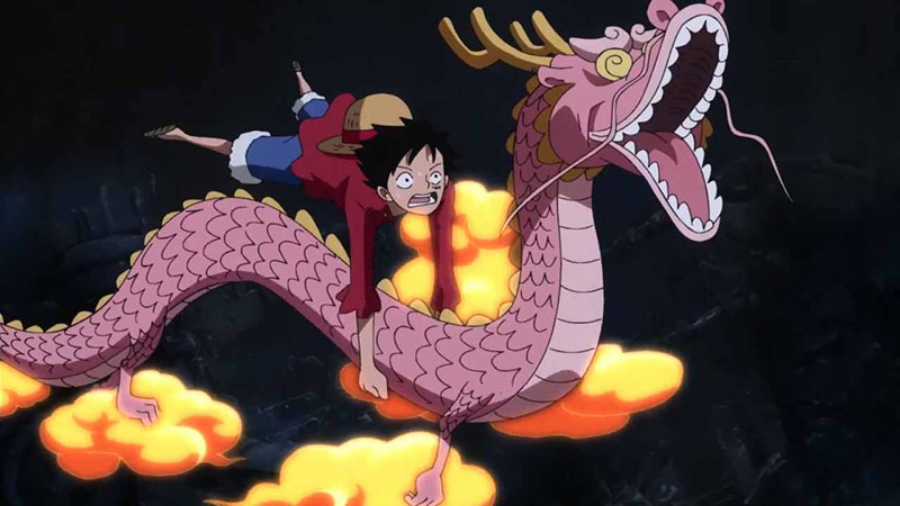 The second theory is also the one that I think is the most unreasonable, which is the theory that Uranus is Momonosuke and Zunisha (The giant elephant that carries the whole island of Zou). An example of this is that Momonosuke ate an artificial Devil Fruit and was able to transform into a dragon, the creature representing the sky. Furthermore, Momonosuke can listen to the "voice of all things" and order Zunisha to destroy Jack's boat.

First of all, I don't agree with this opinion, it is true that Momonosuke can turn into a dragon when eating a Devil Fruit, but remember that Kaido can too. We don't know what Kaido's true ability is, but his transformation into a dragon is undeniable. Furthermore, the Devil Fruit that Momonosuke ate was an artificial Devil Fruit, an invention of Dr. Vegapunk. So the dragon transformation could not be a connection with Uranus, which appeared a long time ago. As for possessing the ability to "listen to the voice of all things", there are many people who have this ability, typically Luffy or Roger. So the possibility of Momonosuke cannot be considered as the only one, as well as the ability to command Zunisha, maybe Luffy can. Even if it was true that Momonosuke was the only one who could give orders to Zunisha, that wouldn't say anything. It should be remembered that Shirahoshi has the ability to communicate with many Sea Kings at once, each of which is larger than an island, so Uranus's strength must be equal to many Sea Kings combined. Zunisha is strong and large, but it is only one and only the size of a Sea King.

The theory that I support the most is that Uranus is related to the moon or even it is lying on the moon. It is easy to understand when there are many details that show that Saint Oda is trying to make a connection with the moon, such as the ability of the Mink race or Enel's successful landing on the Moon. In particular, there were many important details that Enel discovered while on it. 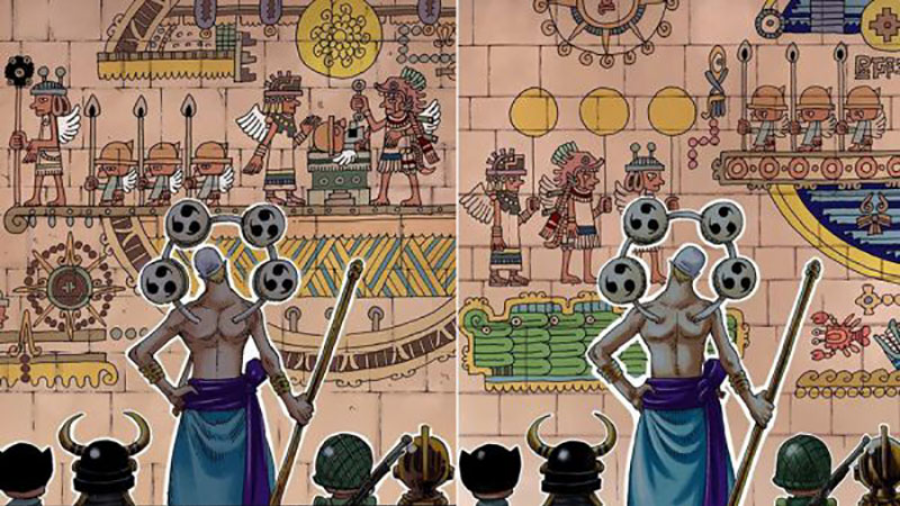 These are two extremely important pictures that give us a lot of information about the Moon, even Uranus. You can see in the picture on the left the presence of the inhabitants of Skypiea, so why do they appear on the moon? I think it's possible that the inhabitants of Skypiea are actually people on the Moon and have to come down to earth for some reason. In the picture on the left, we can see that Skypiea's technology is very advanced when it comes to making robots, something that only Dr. Vegapunk was able to do until recently, that is, Skypiea's technology is ahead. Earth is quite far away. So why does the author Oda tell us in detail about the highly developed technology on the Moon? Could something so advanced be made with this technology?

In the picture on the right, we can see a hierarchy corresponding to each of the Ancient Weapons, the first in the left corner is the sea with the sea creature representing Poseidon. In the middle, I don't know if it's the ground or the boat but I think it will represent Pluton and at the top is the image of the robots that the people of Skypiea created before standing and that place is nowhere else. is the moon that will represent Uranus, the little creatures that appear next to Enel are those Robots. So I think Uranus will have a close relationship with the moon and the character Enel will be a bridge between the Moon and Earth. 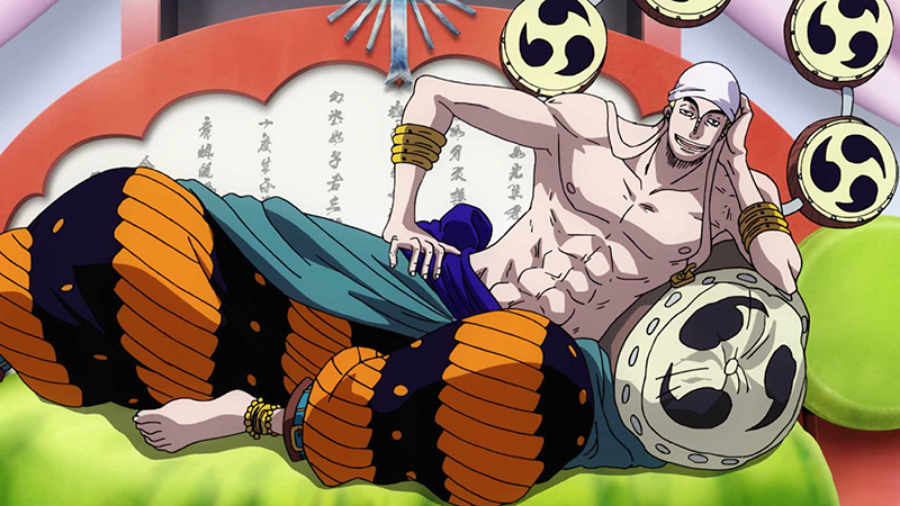 Another detail worth pondering is the fact that the people of Skypiea left the Moon and left only the robots on it, so why should they do that? This may have to wait for Saint Oda to answer, but we don't have any details to speculate.